Water: from right to privilege

Potable water is the most precious commodity on our planet.   It is necessary for survival and has no substitute, yet it is becoming more and more difficult to obtain.

The human population has been growing at an astonishing rate since the start of the industrial revolution in the 18th century. In 1800, there were roughly 1 billion people, according to the Population Reference Bureau. By 1950, the world had 2.5 billion; and in 2005 there were 6.5 billion.  We are now sitting at around 7 billion people and by 2050, that number is expected to be more than 9 billion.

As we continue to reproduce so quickly, Earth’s natural resources, especially clean water sources, are progressively being consumed and polluted at an unsustainable rate.  Many rivers can barely reach the sea any longer due to heavy allocation. Groundwater throughout most of the world is being drawn much faster than it can naturally be replenished. Fresh water sources that would normally be safe to use for human consumption have become so contaminated that they are considered a health hazard unless heavily treated.  The solutions to all of these problems take time and money, both of which many people are hard pressed to give.

Progress in fighting this trend has been made, however, through the efforts of public and private organizations; yet there are still many people who struggle to slake their thirst on a daily basis due to clean water’s limited supply and ever growing demand.

Seven hundred and eighty million people in the world (11 percent of the world’s population) lack access to “improved drinking water sources,” according to a recent study done by The United Nations Children’s Fund (UNICEF) and The World Health Organization. These sources consist of public standpipes, direct household connections, sheltered wells, protected springs and rainwater collectors that “…by the nature of their construction, are protected from outside contamination, particularly fecal matter”. Although this number is still very high, it has dropped drastically from the estimated 2.8 billion people in 1990 due to the efforts of those taking the initiative to combat our planet’s water crises.

Water supply and sanitation interventions have shown to be cost effective in just about any region of the world. In a study taken by the Swiss Tropical and Public Health Institute in which a large sampling of such interventions were looked at, for every 1 U.S. dollar expended, the economic benefits produced ranged from 5 U.S. dollars to 46 U.S. dollars.

The vast majority of this economic benefit (80 percent) was shown to derive from the amount of time individuals were saved by having better access to water and sanitation services. Rather than spend the majority of their day fetching bacteria infested water on foot from long distances, men, women and children with convenient access to fresh water can instead use that time to generate some sort of income, take care of their family, or attend school. This formula only becomes increasingly successful as families are provided with other conveniences, such as simpler ways to sanitize their water as opposed to boiling it and designated waste removal systems.

When these steps are taken, not only is economic production boosted, but also lives are saved. Diarrhea is the second leading cause of death for children under the age of five, according to UNICEF and the World Health Organization. This accounts for the deaths of about 1.5 million children each year.

If the world’s population continues to grow at the rate it is and drastic measures aren’t taken to alter the way much of us in the world collect and use water, then issues with obtaining enough clean water will undoubtedly become a problem for not only developing countries, but developed countries as well. Water use has been growing at more than twice the rate of population increase in the last century according to the United Nations Department of Economic and Social Affairs.  By 2030, if climate change patterns persist, as much as half of the world’s population will be living in areas of high water stress. 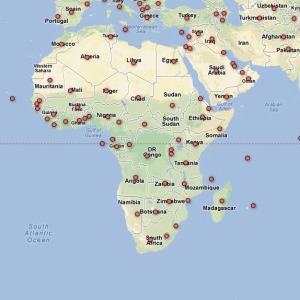